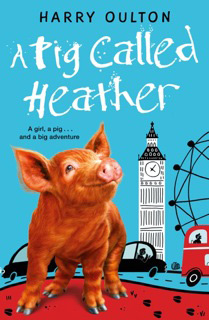 ‘When the pig called Heather woke up after lunch, the first thing she thought was that she had absolutely nothing to do. That was good, doing nothing was one of her best things, and also one of the things she did best.’

Heather’s best friend is a girl called Isla, who lives with her dad on a farm in Scotland. Their idyllic life together is shattered when a thunderstorm destroys the farm and forces Isla’s dad to sell up and move to London – leaving Isla and Heather miles apart and utterly miserable. Then fate intervenes, turning Heather from an everyday pig into a national celebrity, and catapulting her to fame, fortune and most excitingly of all …London. Armed only with her own pig-headedness, Heather embarks on a quest to track down her best friend. After all, how many girls with freckles can there be in London?

“I enjoyed this book because it is funny and sad but above all I couldn’t put it down because I wanted to know what happens next! I give it 100/100 and I can’t wait to read the sequel!”
Alexander Bisland, aged 8

Reviews for A Pig Called Heather

How long did it take to write?
About 2 years. I started it and got to chapter six and then stopped for about six months. Then I started again and just kept writing until it was finished. Originally Heather went to London and then came back again, but my editor asked me to split it in two and write the return journey as the second book!

How did I come to write the book?
I was telling my daughter a bedtime story one night about a magic pig who met the King and the King had no friends and so the magic pig said he would be the King’s friend but the King was too mean and cruel and then mercifully my daughter fell asleep and I could stop telling the story. Phew. But I did like the pig in the story so I started to think about how I could write a story about a magic pig. When Heather started life she had magical powers (there’s a moment at the beginning of the book where she squeals to get Isla’s attention and originally she did that by unwittingly using magic). The idea was that she would learn to use her magic through the story. But as I wrote it Heather became more ‘real’ and the magic wasn’t needed.

Is the farm a real place?
It is. It’s based on a farm in Aberdeenshire which is just by an actual castle. It’s where my wife and I got married. The castle is the oldest Z plan castle in Scotland and was originally built in 1561. It was destroyed in 1665 and restored in the 1980s.

This is the farm that I used as the model for Isla’s, you can see the farmhouse on the left and the castle peeping up in the background.

In the story of course it’s ruined. Somehow I didn’t think Isla would live in a castle!

Is the story about the ghost true?
Half. In 1745, the laird (or landlord) of the castle was Charles Gordon, a  Highlander, and  loyal to Charles Stuart (Bonnie Prince Charlie), the exiled heir to the Scottish crown. When he landed in Scotland, he called all the loyal landowners and loyalists of Scotland together and they marched on England. They did very well and got as far south as Derby before they abandoned the invasion of England and returned to Scotland. They were finally defeated at the battle of Culloden, and in order to make sure the Jacobites (supporters of the Jacobins or Stuarts) were utterly defeated, the English forbade them to wear kilts or carry swords. Many of them hid their swords (wait for book 2!) hoping one day that Bonnie Prince Charlie (who’d fled to France) would return. The ringleaders were rounded up and killed. Charles Gordon was disguised as a labourer and working on the next door farm. The English soldiers knew he was nearby but they didn’t know exactly where. One night they lined up all the labourers and then went into the castle and woke up Gordon’s son and his wife. They dragged them outside and the half asleep boy looked at the men and shouted ‘Daddy!’ – the soldiers hanged him.

That bit is all true, I’ve invented the ghost and the haunted tree, but the story comes from the deep history that runs through the area – at the battle of Culloden, the Campbell clan fought with the English against the Scots, and to this day, Campbells are hated throughout Scotland. I took my children to see round a castle on Loch Ness, and the guide was showing us exactly how to use a broadsword. He ran off to fetch a shield and handed his massive sword to my son with the words, “Hold that, and if you see a Campbell, kill him!”

Is Isla’s school a real place?
It is. My nephew and nieces went to school there, although the building I’ve described is actually a different school. Isla’s best friend Millie Raphael-Campbell is a real person as well – my daughter’s school had an auction and she bid to be in the book, so she became Isla’s best friend.