Weird title for a post, but it’s sort of in response to my son. We were having an argument I’ve had with him (and many others) many times, about whether films are more evocative than the books on which they are based. He claimed films have pictures so they’re much more scary. My daughter then helpfully added that films also have music, making them more atmospheric as well. I didn’t agree. “Books get inside your head! You add your own pictures, and your own music!” They didn’t agree. My son in fact said that no book had ever given him nightmares whereas loads of films had. That felt like something of a challenge. Strange challenge, to actually try and give your child nightmares, but he started it. 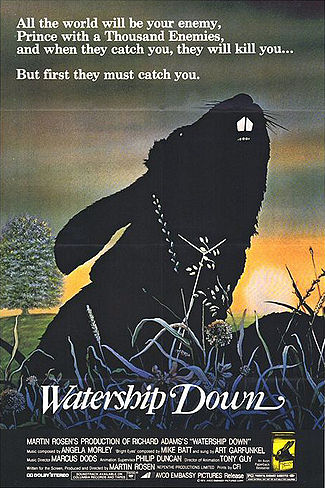 This was my first ever nightmare book. I stayed up really late to finish it before going to the cinema to see it for my birthday treat, and I was flipping terrified. Even that strapline on the front still sends chills down my spine. ‘Prince with a thousand enemies’, what a great image. That’s actually the film poster.

That’s the book. Bit less evocative, but let’s not judge it by its cover. And without the book, there would be no film anyway. My son never read the book, although he did agree that the film was terrifying. And ‘really weird’ as well. Did it for me though. Even today the General still makes me feel a bit tense.

I started this post a while ago, so long ago in fact that my daughter has now got old enough to read the book,  has done, and was gratifyingly scared by the General. In fact, the other night as I was saying goodnight to her we got into a conversation about scary villains. A friend of hers at school is scared witless by the child-catcher in Chitty Chitty Bang Bang who is actually only in the film (not the book) but we’ll allow it. My daughter just laughs at him and says he’s got too much make-up on and a ridiculous nose. So we settled for the General. Excellent parenting having that discussion just as she was trying to go to sleep.

Moving up an age bracket, my son, who is nearly 16 was moaning the other day that he had nothing to read (scary or otherwise), so I gave him three books, and his aunt gave him another, so he was set.

I haven’t (yet) read Primrose Hill or Jerk Bait but I have the other two. My son’s initial reaction was, ‘they’re all a bit dark, there’s like rape in all of them.’ No rape in a Kestrel for a knave, although there’s everything else. It’s brilliant. Simple story, beautifully told. Nothing redemptive. Just great writing. It’s also an excellent film, made by an excellent director (Ken Loach), so worth seeing as a proper cinematic treatment of a book, rather than just a slavish retelling with pictures. Although that said, it’s about a boy and a kestrel, so it’s pretty pretty darn visual and cinematic anyway.

Beck is the last novel by Mal Peet. One of my son’s all time favourite authors, he sadly died before this was completed, so Meg Rosoff finished it off for him. The best thing about Mal Peet’s books is his total refusal to compromise and write down to his audience. His books are set abroad, they’re always about totally different things, and in an age bracket that tends to panic if it isn’t dsytopic, he writes intelligent, credible, contemporary (or historical) fiction. With proper characters, and proper plots. And earned pathos. And difficult words. And they don’t patronise their audience. They assume you are intelligent. So, when I produced a Mal Peet he hadn’t read and didn’t even know existed, he was a happy boy. There is rape in this one too, but it’s mentioned once and never again. It’s also in no way gratuitous.

So, Primrose Hill and Jerkbait – as I said, I haven’t read them. Jerkbait I got for him because he liked Winger (US book about teens and Rugby) so I thought this might appeal (it’s about hockey). Primrose Hill was from his aunt, and got amazing reviews. He really liked both, but said they were extremely dark and quite depressing. I will read them and report back at some point.

However, his comment about them all being dark made me re-think things a bit. Surely fiction for his age group can be funny too? For his next batch I’ve gone funny.  Which was actually really quite tricky. Humour for adolescents is hard. It tends to fall back on romantic comedy and that’s just dull. Jeeves can be worth a go, but it didn’t work for him. Don Camillo i think is very funny, but probably very dated now. Somehow I think he’s a bit young for Nick Hornby, although I might start him on Fever Pitch. So, after much thought I went for three – Another Mal Peet (Life, an exploded diagram) which is about first love building up to first sex, intercut with the history of the Cuban missile crisis. The two strands play against each other and each builds to a climax, but only one of them goes off. It’s really good, and for some reason I hadn’t given it to him before. I added The Commitments for good measure, and also the amazing The rest of us just live here.

I’ve talked about The Commitments before. Roddy Doyle’s brilliant coming of age story about starting a band in Dublin. It’s also a fantastic film, as the only thing missing from the book  is being able to hear the music, which of course, in a film, you can. He will love it. The rest of us just live here is written by Patrick Ness and is laugh out loud funny. If you’re a teen. Patrick Ness finished A Monster Calls for Siobhan Dowd when she died with it unfinished, and has also written a trilogy called The Knife of Never letting go which none of my quite bookish children have been able to get on with. I can’t explain anything about TROUJLH without giving too much away, so I won’t. Just read it. Channel your inner teen. Or just give it to a teen. I’d be surprised if they didn’t laugh a lot.