Another post which I’ve started really so I can just tell you about one of my favourite books from when I was young. I know next to nothing about traditional sci-fi, so I can’t give you chapter and verse on any of the heavyweights; Isaac Asimov, Arthur C Clarke, or even Robert Heinlein (I loved the film Starship Troopers but can’t claim to have read the source novel). I’d probably say slightly lamely that rather than being proper sci-fi, this list is more ‘books about the future that I’ve really liked reading’ –  technically I suppose that’s sci-fi, but it feels pretty entry level…

I loved this when I was a teenager – Cool character, cool title, I even thought the author had a cool name. There are plenty of Stainless Steel Rat adventures, and they may perhaps be a little samey (and hardly Isaac Asimov), but they’re very entertaining and fun. The hero is a maverick thief with a bizarrely strong moral code. Has adventures where he gets into endless trouble and has to shoot/steal/bluff/charm his way out of it. Loved them, but I don’t imagine many beyond 16 would share my enthusiasm…

I haven’t picked one particular title because there are so many, and they’re pretty much all ground breaking and supremely imaginative. His bibliography is just like an endless list of classics, Journey to the Centre of the Earth, the Time Machine, Around the World in 80 days, 20,000 leagues under the sea and so on. The sheer breadth of imagination is amazing. That said, they were written a while ago so the language can feel a tad old fashioned and some of the plotting likewise. Still, without Jules Verne we’d have no steam-punk, and then where would we be?

Talking of books that have spawned imitators… this (along with  Dracula) has a lot to answer for, and I mean that in the best way possible. This is pure imagination, a visceral story which takes man’s refusal to accept his own limitations (he is neither God, nor a woman, and therefore cannot give birth), and simply lets events play out. It is science-fiction in its purest sense. Science is set up against reason, biology and religion and somehow they all lose. But it’s never heavy handed, there’s nothing preachy about it, it’s just fantastic story telling, and in its depiction of one man’s arrogance, all the more horrific for being both so microcosmic, it is terrifyingly plausible.

For some reason I’m bracketing these two together, even though I like 1984 more. They’re both amazingly far sighted, but also excellent stories.  Much of what these two predicted hasn’t happened (both foresaw a totalitarian future which we’re not heading towards yet, although North Koreans might not agree) – so just enjoy them as cultural harbingers (Without them we’d have no Room 101, no Big Brother, no classing people as Alpha Males/females or that great Apple Advert) and well written truly imaginative stories. I may be underestimating the power of Jennifer Lawrence, but I can’t see The Hunger Games having quite the same impact. 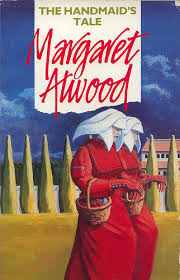 “Some books haunt the reader. Others haunt the writer. The Handmaid’s Tale has done both.”

That’s what Margaret Atwood says about the terrifying ‘feminist dsytopia’ she wrote in 1985. The US has been replaced by Gilead; a society in which high status couples have a handmaid who has sex with their ‘commander’ – they are named ‘of+name of the commander’ so the heroine is called Of-fred. Margaret Atwood has pointed out that actually a classic feminist dystopia would strip all women of all rights; Gilead is more like a pyramid shaped dictatorship with control being limited to those at the apex. It is a truly chilling book and rightly seen as a 20th century classic.

Apparently this is an indictment of romantic, chivalric novels of the sort written by Walter Scott. It seems Mark Twain blamed the South’s desire to fight in the US Civil war on Scott and those like him who romanticised conflict and war. Either way it’s a great story, funny and clever. I’ve just been given Mark Twain’s autobiography, which is way, way too long. When I dip in and out it’s excellent, but it’s like a very cold lake, refreshing and good for the soul, but the dips have to be short and not that frequent. 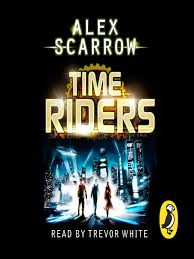 This is more your trad YA sci-fi. In the future someone has invented time travel, but realising what chaos it’s going to cause has outlawed it, and created a team of young (natch – this is YA after all) ‘time riders’ to go back in time, police the past and make sure nobody is breaking the rules. As any time travel will change the past, thereby affecting the present, their job is quite straightforward. They live in a 24hr time loop just before 9/11/2000, and they watch what’s going on. If anything in the present changes they know something has happened in the past and they must travel back in time to sort it out and restore the status quo. Sounds far fetched but it’s a great series. Truly exciting and page-turning, and also quite thought provoking as these young people are shown (and we are invited to speculate) exactly how much history could change following the simplest alteration of the past. I’m explaining it badly, but theses books are really good, and properly un-put-down-able. There are also about eight of them, which if you like them, is great.

The Time Machine, War of the Worlds, the Invisible Man – They’re all classic, all amazingly dated, but he is the man who invented the idea of the time machine, so technically, without him we’d have no Bill and Ted’s excellent adventure and no Dr Who…

The Hitchiker’s guide to the Galaxy – Douglas Adams

I think I am the only person in the world who didn’t like this. It’s cultish, seemingly never dates, and people will quote it at each other endlessly. Drove me nuts. Make your own mind up…

This is stylised, ‘cyber-punk’ writing, you either love it or you hate it. But, this is the book that invented the concept of cyberspace, so for that reason alone it features. I read it a long time ago and all I can remember about it is being very confused but thinking it was very cool… That’s probably grossly unfair and it’s received enough plaudits and stuff that you shouldn’t take my confusion as reprensentative of its quality in any way. Enough caveats. 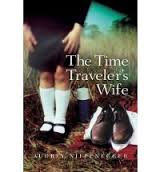 I loved this – What a great way to do time travel. There’s been stuff before about how painful it must be to live for ever and watch those you love grow old and die, (most memorably for me in the schlocky film Highlander which not only has great swords and stars a ridiculous Sean Connery, but also has that fantastic OTT Queen song ‘who wants to live forever’), but never done in quite this way. Very clever, and somehow manages to make a well worn theme feel shiny and new (sorry, I’ve got camp songs on the brain now).

Average dsytopian trilogy about a future where we’ve got rid of death so… nobody dies. Population overload, nobody can have any more children, any child who is born (without permission) is put into a ‘surplus’ hall. Familiar narrative development sees youngsters question this as the status quo, hook up with the resistance and bring down the evil regime. It’s only on here because there are some very interesting ideas about living for ever being a really really bad idea – socially, physically and environmentally. Marriage becomes intolerable, life becomes unbearable etc. Better than The Hunger Games, not even on the same page as The Handmaid’s tale.