Back in the day, not so very long ago, when I used to work in TV, there was one cast iron rule. No period dramas. At all. Unless it’s  Downton Abbey. Or based on a Jane Austen novel. Or written by Peter Flannery (Our Friends in the North, the Devil’s Whore). They were deemed to be too expensive and the audience didn’t watch them. Why not? You may well ask. I was actually told once, by a senior drama executive, that audiences didn’t enjoy period drama because it wasn’t about them so they couldn’t identify with it. Too stupid apparently. So British TV goes the other way and becomes self consciously anti-intellectual. Sad when you think we used to make TV like Play for today, Edge of Darkness, A passage to India, Brideshead Revisted and the amazing The Singing Detective.

You can actually buy the scripts of The Singing Detective, published as a book, and they are a fantastic read – anyway, a while ago we started dumbing down. The rise of celebrity, people becoming famous for being famous rather than for what they’d achieved. All this meant the demise of intelligence as something to be valued or trumpeted. 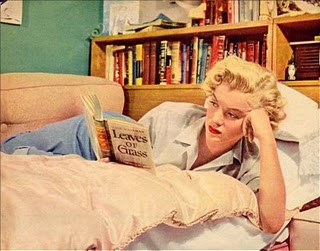 Hard to imagine today’s Marilyn doing that kind of photo-op. So now, TV treats audiences as stupid (there are obviously exceptions – US long form series like The Sopranos, the West Wing etc), but as a rule, audiences mustn’t be made to work too hard. They’re tired, they just want to relax and watch stuff with which they can easily identify. Or empathise. That means no period dramas on television. Alarmingly though, when I started talking to publishers and suggested a few ideas for period novels, they said the same thing. They said that today’s young readers can’t cope with old stuff. There’s no market for period stories. We’ll ignore Hilary Mantel for the moment and ask something else; if young people can’t identify with someone outside their immediate experience, how do they cope with stories about magicians? and indeed dystopian stories set in the future?

What is true though, is that as readers and writers we bring different things to period fiction. There’s a short story by Jorge Luis Borges called ‘Pierre Menard’ which looks at the idea that someone writing now could so immerse themselves in 17th century Spanish culture that they rewrite Don Quixote word for word. The point is that even though it’s an identical book, the contemporary version is way richer because it’s written now, not then. And that’s I think the key to writing period fiction. You need to give it a contemporary sensibility.

Lydia Syson – A world between us and that burning summer

Set during the Spanish Civil War this is a love triangle, but way more epic. John Green writes achingly contemporary adolescent crushes, Lydia Syson writes crushes we cannot help but recognise and then sticks them in a very well researched historical melting pot/crucible, call it what you will. I haven’t read That Burning Summer but apparently it deals with a girl who hides a Polish pilot during the war and the emotional awakening that um… awakens? This is exactly how to write a period novel for a demanding contemporary audience.

Mal Peet is another one who achieves the contemporary sensibility thing brilliantly. His book Tamar goes one stage further and intercuts a contemporary quest and love story with an exciting story set in Holland during WW2. Clever, simple and elegant. Life, an exploded diagram is his take on the Cuban missile crisis, which forms the backdrop to a story of sexual awakening in the strawberry fields of Norfolk. Excellent.

Those though are relatively recent history, so not that hard to give them a contemporary spin. This one is more of a challenge and all the more interesting because of it. My friend and debut author Jessamy Taylor very kindly let me have a look at her book which is hot off the press. Set in 1143, King’s Company is the story of 14 yr old William D’Amory who is forced to choose between loyalty to the exiled heir Henry (who will become Henry II), and the incumbent King Stephen, who his father died protecting. This is a classic (and very cinematic) coming of age story, as the hero’s journey to adulthood is mirrored both by England’s gradual emergence as a unified kingdom under Henry, and William’s own rejection of his father’s political allegiances as he forms his own. A lot of contemporary YA fiction is about adolescence seen through the prism of rebellion and sexual/political awakening, (The Hunger Games, Carrie, The Declaration, Buffy the Vampire Slayer – not a book, but the subtext is pretty clear) so what better metaphor to use for the ‘formation’ of an adult than Henry’s pulling together the disparate factions  of King Stephen’s England into the Plantagenet whole. And it’s really exciting! There’s swordfights, battles, betrayals, all the stuff that boys did in those days. Jessamy tells me that book 2 which is underway at the moment is more about the role in women in the 12th and 13th century and will certainly pass the Bechdel test. Read it and enjoy the 12th century! Jessamy’s book is available from the always excellent Indie Books (http://indiebooks.co.uk/)

There’s Sally Gardner’s The red necklace, Elizabeth Laird’s Crusade,  there’s The Book Thief, Boy in the striped pyjamas, Philip Pullman’s Ruby in the smoke, Auslander, Rifles for Watie, Soldier Boys. There’s any Asterix, and I have blogged in another post about historical series. Having written this I’m going to go back to publishers and bully them into reconsidering my various period offerings. Or maybe I’ll just re-read the ones on this page, and keep looking for others.